Portrait of a Woman of the Hofer Family
about 1470, Swabian 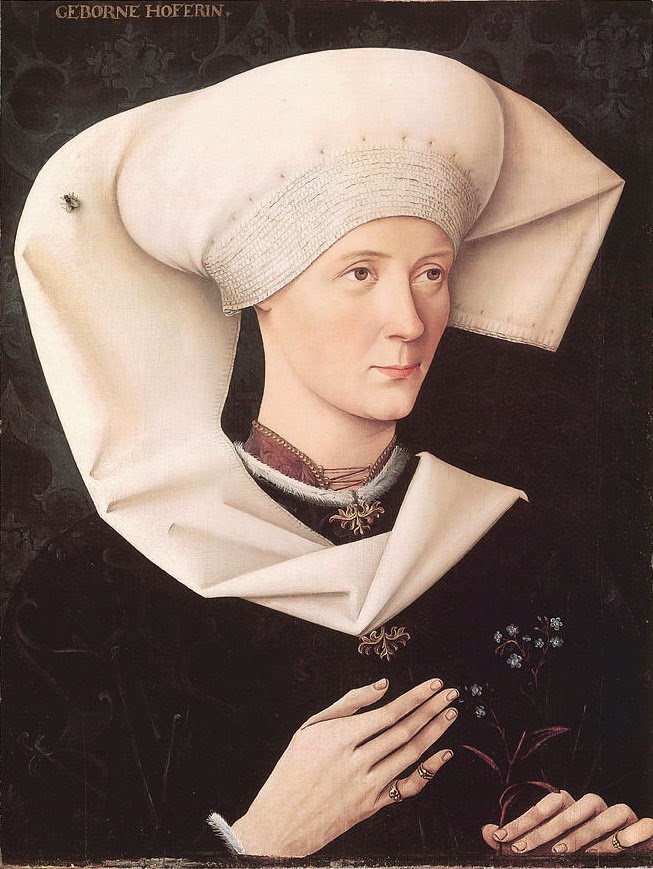 The sitter's family is identified by the inscription
"GEBORNE HOFERIN" (born a Hofer),
although her precise identity is unknown.

She holds a forget-me-not, presumably for remembrance.
On her headdress is a fly,
either a symbol of mortality or a reminder of the artist's skills of illusion.

The artist worked in Southern Germany, Württemberg, near Ulm;
the portrait probably dates from about 1470.
National Gallery, London 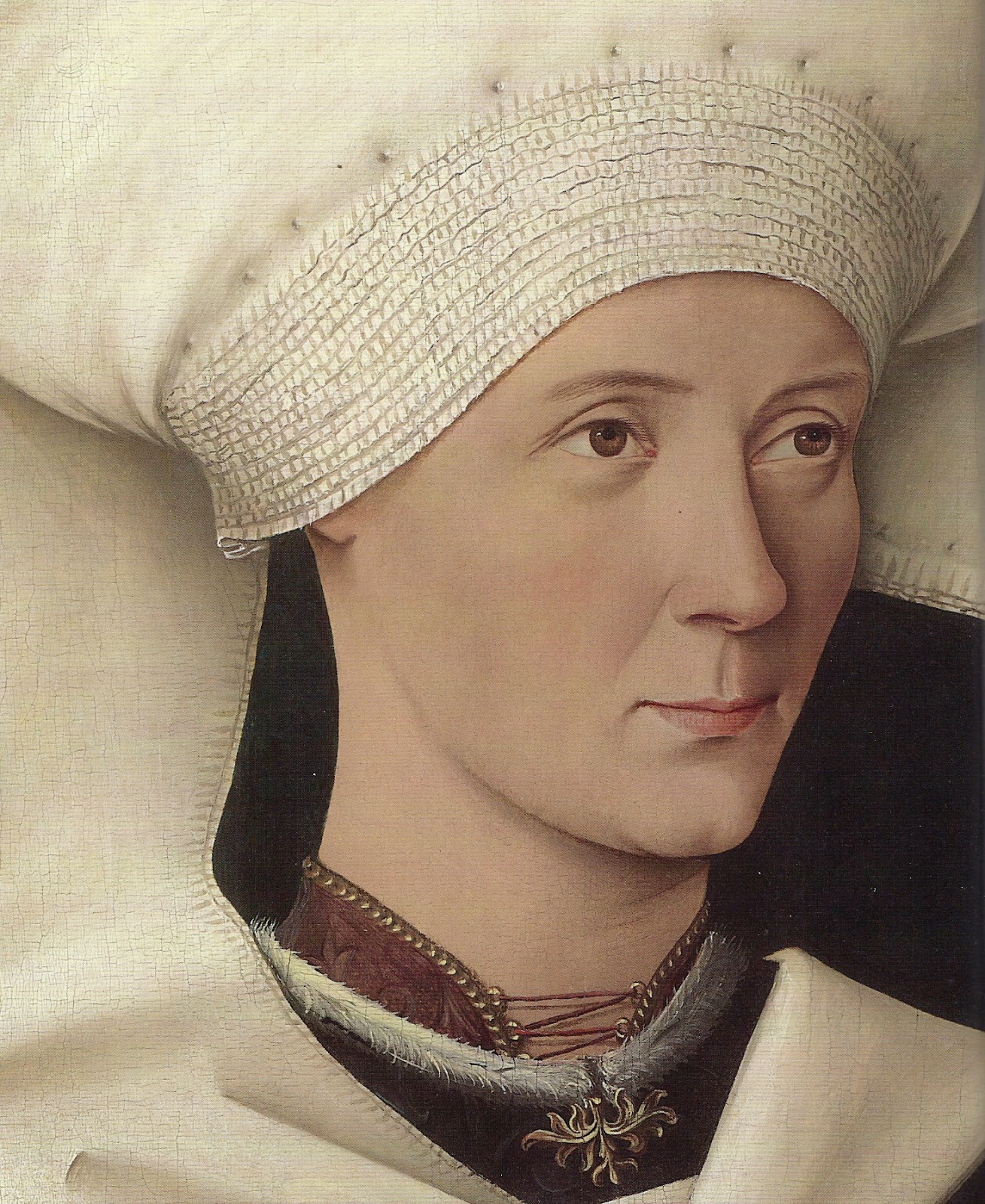 This is the painting of my 2015 Diary
from the National Gallery, London,
for the first February week.

After a rather clouded January (in the truest sense of word!!)
I was so delighted this morning when I opened my Diary,
and had the need to share my pleasure.

The National Gallery 2015 Diary is a celebration of colour.
Each month takes a different colour as its theme,
and each week features a famous painting from the National Gallery's collection
that schowcases how artists used colour in antmospheric landscapes,
ornate textiles or expressive portraits.

This diary is sold out, but there is the
National Gallery Colour 2015 Mini Desk Diary available here 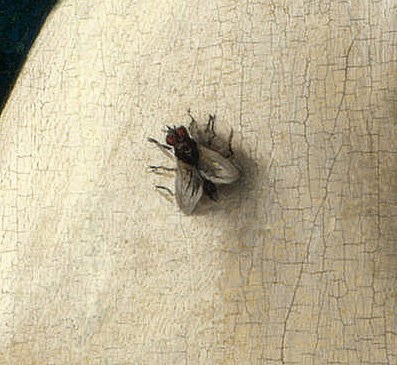 The portrait of the Swabian woman of the Hofer family is both poignant and comic.
Her eyes twinkle, and her mouth is halfway to a smile,
as if she knows only too well what the artist has done to her:
on her copious white veil sits a black fly, positioned as conspicuously as a beauty spot.
It lives – the illusion is superb – and it will die, like the brilliant blue forget-me-nots in her hand.
Memento mori can be stultifyingly conventional (the skull, the candle),
but these are so unusual as to be sharply arresting.
And the fly is a proof of the anonymous artist's gifts too:
a guarantee of the realism and fidelity of the portrait.

The Painter and the Fly

Flies had featured regularly as decorative elements in the margins of medieval illuminated manuscripts and Books of Hours such as the Isabella Breviary. They began to appear in paintings from the fifteenth century onwards. Art historians who have tracked the appearances of the fly over the ensuing century and a half have divided decorously into two groups. For some time, the consensus seemed to be that flies were to be read as religious symbols, connoting sin, corruption and mortality (Kühnel 1989, Estella 2002). The well-known associations between the fly and the name of Beelzebub, ‘Lord of the Flies’, a local Philistine deity first mentioned in 2 Kings 1 and later promoted to the condition of Satan’s lieutenant, helped pin down the fly’s demonic credentials. A clear example of this is The Mystic Betrothal of St. Agnes (c. 1495/1500), by the Master of the St Bartholomew Altarpiece, in the German National Museum in Nuremberg. The Golden Legend tells us that St Agnes gave an unwanted suitor the brush-off by telling him that she was betrothed to Christ. In the background of the painting are two peacocks, symbols of virginity and resurrection, and a larger-than-life fly, symbol of the earthly lusts she has renounced......

....More recently, art historians have begun to wonder whether the fly is quite so easily to be swatted for symbolic purposes. For the fly seems also to be used, as Felix Thülemann has put it, as ‘a selfconscious representation of superior painterly prowess’ (Thülemann 1992, 543). The fact that representations of flies are often to be found in the vicinity of artistic signatures, especially those which have the trompe l’oeil form of the rolled or torn strip of manuscript, seems to heighten the association between the fly and the making, even the maker, rather than the meaning, of the work of art...

....
There is an ur-story of the painter and the fly, first told by Filarete in his Trattato di Architettura, written between 1461 and 1464, but known much more widely from Vasari’s brief reference to it in Lives of the Painters (Vasari 1996, I.117).

The young Giotto arrived in the studio of his master Cimabue, to find a portrait in progress on an easel.

Giotto painted a fly, seemingly poised on the nose of the painting’s subject. When the Master returned to the studio,

he attempted repeatedly to brush away the fly. Implicitly, this is the moment at which the genius of the young Giotto was noticed, and a new area of realism inaugurated. The story was quickly transferred to other artists. In his fictitious dialogue between Leonardo and Pheidias, Giovanni Paolo Lomazzo has Leonardo tell how the young Andrea Mantegna fooled his Mantuan Master by painting a fly on the eyelash of a lion in his painting of St Jerome; envious of his talents, the Mantuan master sent his uppity apprentice away to work with Bellini (Lomazzo 1974, I.93-4).

In these stories, the fly signals the art that conceals art of the painter, an ostentation arising in ordinariness, a perfecting defacement.....

When they stumble into art, flies are the ground promoted to the status of figure, a breaking through into visible significance of the blooming buzzing monotony of the insignificant, the accidental, the ignored; they are what Wallace Stevens calls ‘a repetition/In a repetitiousness of men and flies’ (Stevens 1984, 502). Where other lowly or loathly creatures have often been held to characterise the abject or the informe, flies have a more specific office. As embodiments of accident, of what just happens to happen, as synecdoches of the untransfigured quotidian, their principal signification is as the opposite of art. And yet, for that very reason, flies have whizzed and crept and tiptoed across art and writing for centuries, never quite achieving the status of a subject, of that which may be fixed in view, and yet irresistibly drawing the eye and soliciting the attentions of the forming hand.

Flies are, in two senses, a provocation to art – a nose thumbed at art’s grandiose self-esteem, and a challenge to the artist’s skill. The fly is always caught – as though on a windowpane - between the condition of emblem and phenomenon: at first sight a mere smudge, blot or blemish, which then becomes the emblem of its own obstructive phenomenality.

With great thanks to Jackie from  HOME

for stimulating me to delve further into the mystery of  "HOFERIN's Fly"!!

Any kind of interpretation or idea on this subject

will be more than welcome.