Though every grey-shingled, white-trimmed house on this legendary New England island looks like every other grey-shingled, white-trimmed house, the natives know the labyrinthine way to the Oldest House.  (Oldest' being a proper noun here, not an adjective).  And when you finally track it down on its solitary hilltop, its air of chaste isolation - in this town teeming with trophy houses, Hamptons émigrés and admirably restrained twee - will take your breath away.  With just a few gnarly lilacs scraggling up the stony drive, a bare yard all around, a rank swamp behind and in front, the weedy echo of a long-gone lily pond, the stark and solemn Oldest House is asceticism made flesh.  Or anyway, wood and brick. 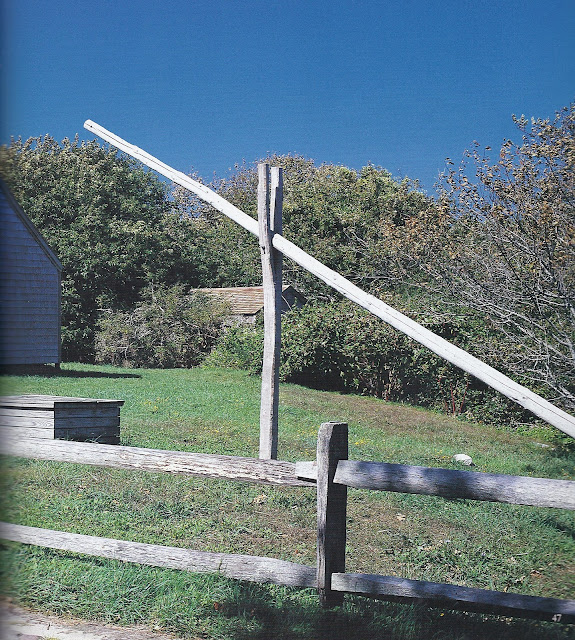 Houses in this 17th-century  'lean-to' style always faced south.  That way, their two-storey facades could warm themselves in the sun while their sloping backs could simply hunker down against northwesterly winds.  This is architecture plain as a Quaker hat, as is the Oldest House itself - expect for that slightly pretentious chimney, a brick tour de force embellished with an odd, inverted U in relief.  Some think it celebrates the c1686 uniting in wedlock of two warring families - the Gardners and the Coffins - builders of this grandish residence (Coffin lumber on Gardner land).  Some think it's a lucky horseshoe, inverted for the dumping of malevolent household spirits, and call the place 'Horseshoe House'.  Whatever its symbolism, that chimney turns characteristically functional below the roofline, providing a single fireplace on the first floor, plus three more on the floor below, where it warms two moderately large rooms - the west parlour and the east hall - and the summer kitchen.  The west parlour was the, um, best parlour, while the east hall was the dining room/den/library/'family room', and, with the coming of the winter, kitchen.  Upstairs, despite laws of physics regarding the movement of heat, two spartan sleeping chambers are as frigid today as they surely were then.  As dark, too.  And surely inhospitable to shivering children bedding down in hard little cots on the north-facing side. 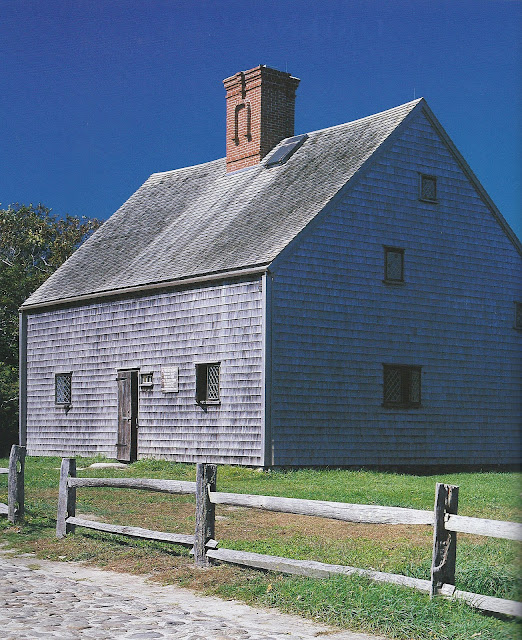 Why would anyone choose to build a house on an island with no farm land and no forests, offering the barest of subsistence living?  Well, if one were a Massachusetts Quaker in 1659, and if Quakeresses were being hanged for their beliefs on Boston Common (they didn't call them Puritans for nothing), a little free land on a scrubby, sandy island out in the Antlantic might look pretty appealing.  So the earliest Coffins prospered in their Oldest House-to-be, passing it on, eventually, to the seafaring Paddacks, a clan whose paterfamilias must have been fairly terrifying or at least implacably unforgiving.  The story goes that his small daughter Love idly dug a little trench (with a clamshell, mind you) in the capacious lily pond across from the Oldest House.  Somehow, though it seems inconceivable, her digging emptied the pond, blew out the dam and ruined the mill, and father Paddack was evidently so furious that fearful, guilt-torn Love revealed the truth only on her deathbed.  That bed is not in the house today.  Its current furnishing, carefully maintained by the Nantucket Historical Association, comprise a scholarly best-guess as to what was really there - 'It was the Quaker way to use things, and use them up.'  Not an original stick remains, consequently.  And 17th-century American furniture being virtually unbuyable today, the Old House has been sparsely furnished with fairly humble 18th-century pieces from the NHA collection.
But 'sparse' is an understatement here.  These rooms are not just bare-bones, they hardly include a stitch of warming upholstery, curtains or clothing, despite an impressive display of spinning and weaving machinery: a large and looming loom in what was once the hall nd a spinning wheel in the parlour/kitchen.  One hopes, for the Paddacks' sakes, that they lived here with a touch more luxury than we see now, for the family lived there for 132 years.
B

The entrance hall.
Just seen to the left is the almost unnavigably steep staircase 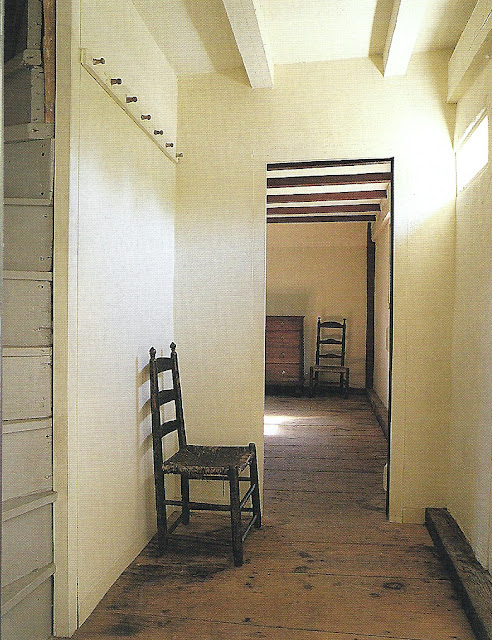 The Oldest House fell on hard times after that  - a curiously mixed blessing; for while it quietly crumbled, it also remained virtually untouched.  Only an 1881 family reunion awakened descendant Tristram Coffin to the necessity of saving his family's piece of American history.  By 1923, when the house became the property of the NHA, a carefully rethought (though equally inauthentic) bit of architectural licence resulted in the replacement of its double-hung windows with the quaint latticework we see there today.  Seemingly, the OH ghosts don't care what kind of windows the house has, for they don't haunt its interior. 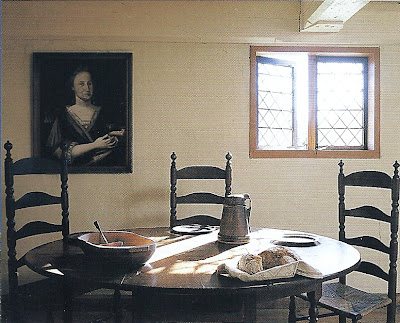 The east hall, with a photo reproduction of the Nantucket Historical Association's
portrait of the Oldest Occupant - Mary Gardner Coffin 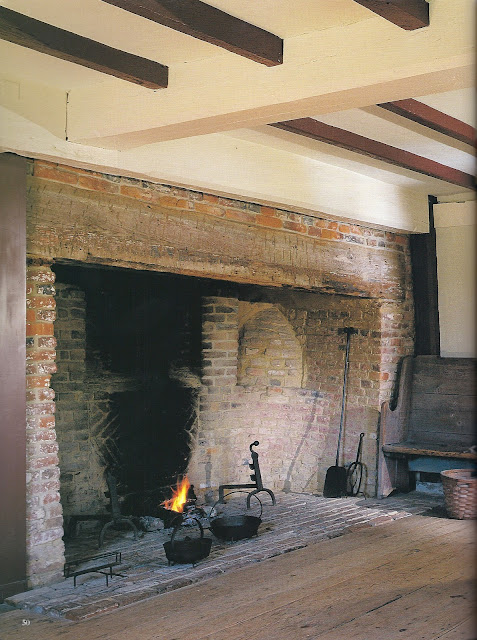 The east hall was used as a 'family room'.
The design of the 18th-century American table and chairs
reveals their English derivation. 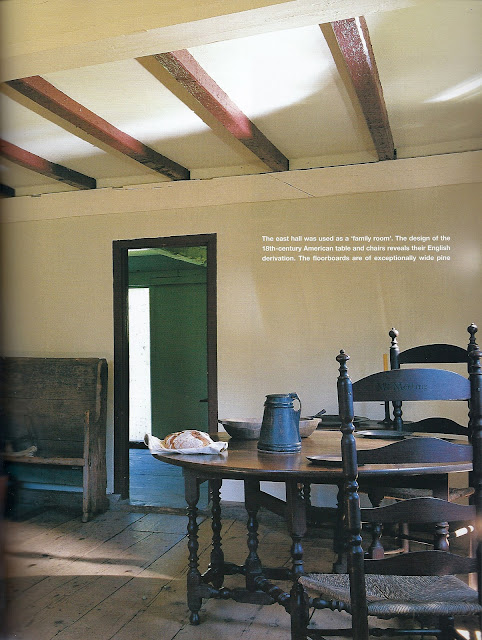 Stoneware jugs and a wooden trencher stand on the pantry shelves 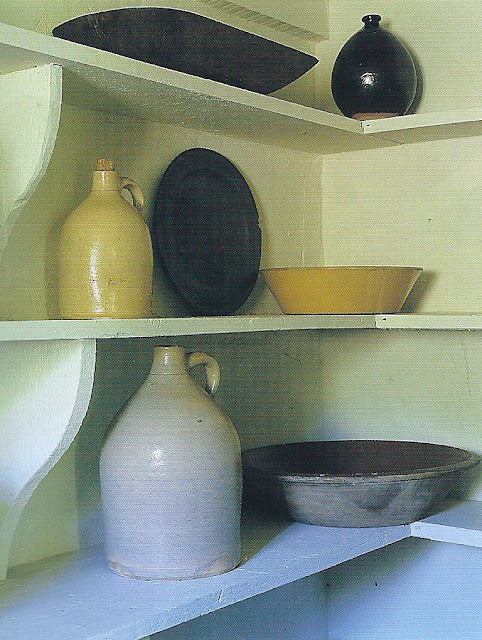 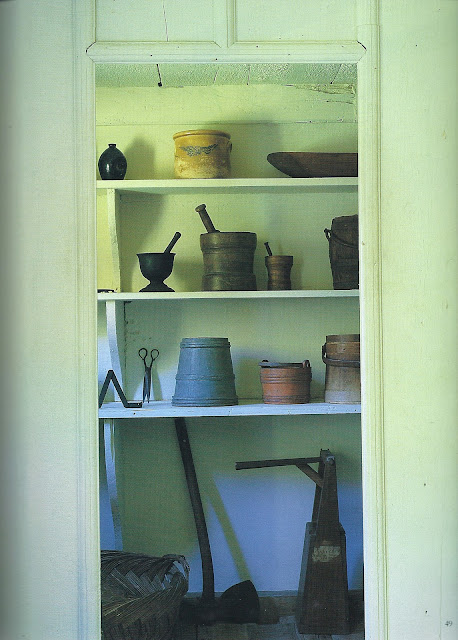 The austere second sleeping chamber contains a cradle,
a rope 'youth' bed and an early trundle bed, covered with a wool quilt. 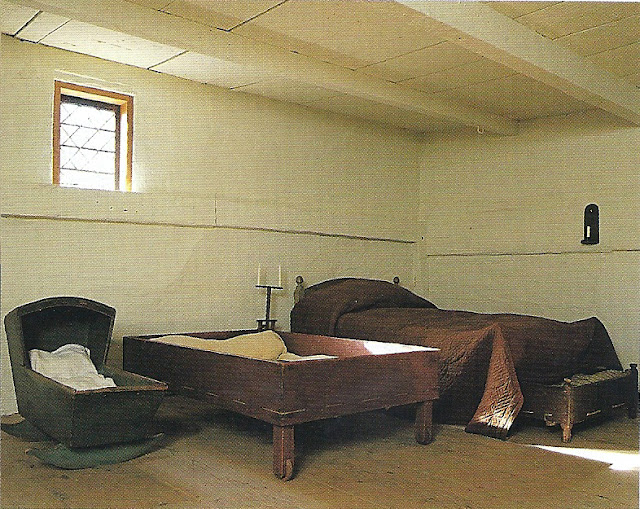 The sleeping chamber.
The child's rope bed is covered with a blanket embroidered with roses in the corners. 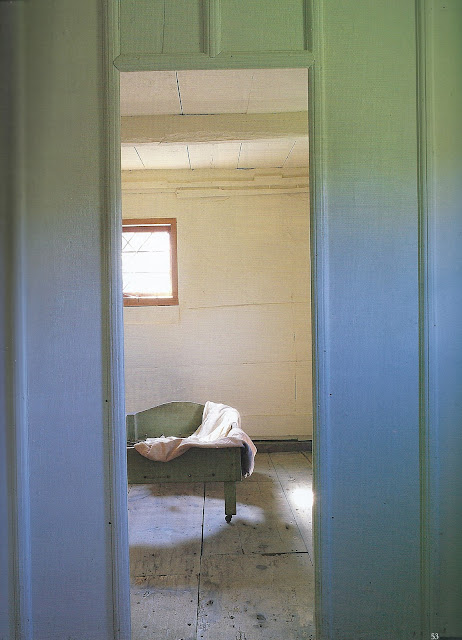 How sadly grim that lone abode
Where once the yeoman reaped and sowed!
It seems to warn, who ventures near,
To shun those walls, moss-grown and drear;
Where ivy climbed and roses grew
When time was young and life was new.

Well, the historic landscape expert might quibble about those Victorian roses and ivy.  And 'grim' is a trifle harsh.  But 'lone' closer to the genius loci, perhaps.  And 'lovely' largely sums it up.

"The history of Nantucket's Oldest House is one of religious persecution, frightening fathers and doleful ghosts.
But 'lovely' is the only word do describe it", says Carol Prisant. 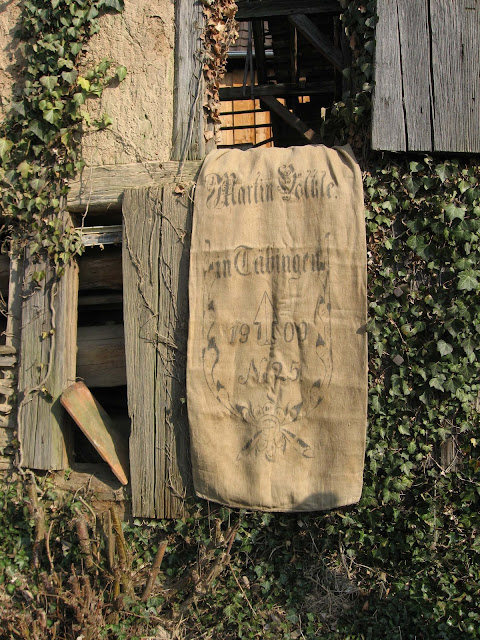