Fell in love with this painting

when open my National Gallery diary on Monday this week. 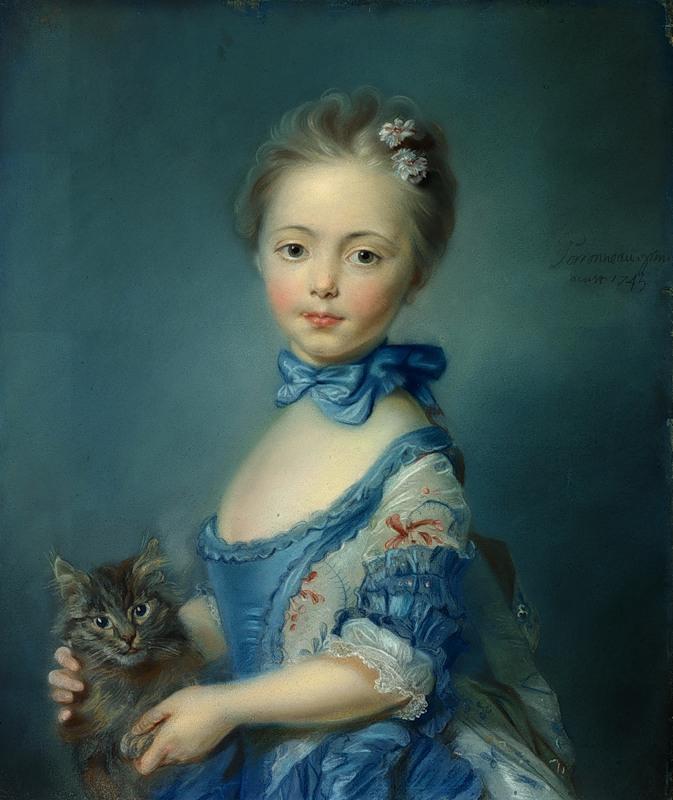 Although it bears the artist's signature and the date 1745,
it has been thought to be a later imitation of Perronneau, because of some uncertainty
in the treatment of the anatomy and an excess of that charm
associated with 18th-century French portraits of children.
It may, however, be an original.

The girl, who has not been identified, has been posed by the artist, and the kitten by the girl;
the apparent naturalness of the portrait is dependent on artifice.
A cat is sometimes included in portraits of children
as a symbol of the wildness of nature intruding upon the innocence of childhood. 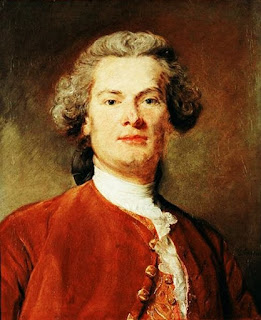 In the 1700's, Jean-Baptiste Perronneau was one of France's most significant pastel Portraitists.
During his lifetime, pastel portraits were immensely popular - widely commissioned and collected.
Perronneau began his career as an engraver but shifted to oils and pastels in 1744.
He made his Salon debut with a pastel portrait in 1746
and received full membership in the Académie Royale in 1753.
Perronneau exhibited steadily at the Salon until 1779 but also traveled extensively across Europe
in search of patrons.  In Paris, he competed with Maurice-Quentin Delatour,an older and more established painter who was very much the portraitist of choice among fashionable, affluent Parisians.
Despite being favorably compared to Delatour,
Perronneau was forced to find much of his clientele in the French provinces and overseas.
(text source : The J. Paul Getty Museum)
*
* 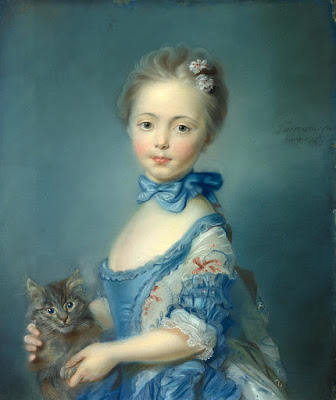 Perronneau was, after Maurice-Quentin de la Tour, his older contemporary, the most famous specialist of portraiture in pastel in 18th-century France. The use of pastel as a medium had become fashionable in Paris after the visit of the Venetian artist Rosalba Carriera in 1719-20.

He was born in Paris and is thought to have been trained by Charles-Joseph Natoire and by the engraver Laurent Cars.
He began his career as an engraver before turning to portraiture, in oil as well as in pastel.
He became a member of the Academy in 1753. In France Perronneau was less successful than La Tour, who portrayed most of the leading figures of the age. Perronneau spent a wandering life, which took him to Italy in 1759, to Russia in 1781 and frequently to Amsterdam, where he died.

He made his Salon debut with a pastel portrait in 1746 and received full membership in the Académie Royale de Peinture et de Sculpture in 1753, with portraits of fellow artist Jean-Baptiste Oudry and the sculptor Lambert-Sigisbert Adam, both now at the Louvre Museum. After 1779 he no longer exhibited in the Paris Salons, but the clientele in his portraits reveal how widely he travelled in the provinces of France, with a group of sitters connected with Orléans, but also in Toulouse, Bordeaux, Lyon.
Farther afield he may have been in Turin and Rome, and in Spain, Hamburg, Poland, Russia and England.
He died in Amsterdam virtually unknown, according to his biographers.